What She Forgot -Cole Baxter 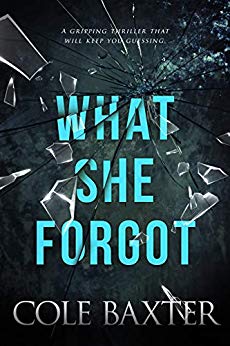 I’ve been contemplating for over a week on how, or even if I was going to review this book. I tend to only review books that I’ve truly enjoyed. However, my fiance pointed out that I need to post not just the good, but also the bad and the mediocre. And this book, my friends, fits into the last category. It had so much potential as a psychological thriller, but the plot twist and ending fell flat.

Hannah wakes up in the hospital after an auto accident with no memories. She doesn’t even know who she is. Both vehicles caught fire and the person who was driving her, as well as the other driver, were both killed. She has no idea who the woman in the car with her was, and recognizes no-one, even her beloved husband who is there for her the entire way. He and the kids even assemble a binder to remind her of all of her favorite things and how to work most of the household appliances that we take for granted every day. Hannah slowly adapts in to life as a wife and mother. However, the other school moms say that she has changed. Her favorite color, she now hates. A once-hated hobby of baking becomes her favorite thing to do. As a former jewelry-maker, she can no longer work out how to fit the pieces together to form the beautiful jewelry she was well known for and had made a career of.

Little things start to happen that even her children notice she’s not the same Hannah she was before the accident, and yet, her husband says nothing, while her doctor says it’s normal for someone who survived a major trauma. Even Hannah’s mother knows something is up.

Weeks after her awakening, she suddenly regains all of her memories. Here comes the plot twist. I can’t say much without giving it all away, but it was unexpected. There was no foreshadowing other than the “differences” that everyone noticed. The introduction to the twist fell flat. Almost as if the author just suddenly decided that this is what would happen. As I said, the twist and the ending fell flat. It wasn’t bad for a quick read if you want something that’s not too deep, decent for reading before bed because I didn’t mind putting it down to go to sleep. The story had wonderful potential, and it was interesting during the beginning and middle, but the author tried entirely too hard to make the plot twist into a shock-worthy moment, but it wasn’t. Even with the lack of foreshadowing, it just didn’t hold a candle to other books in the psych thriller genre. Honestly, I give it a 6/10. It interested me, but I was never fully captivated by the author’s words. Like I stated, it’s a good read if you want something that’s not too hard to put down and doesn’t require a stay-up-all-night-and-finish kind of book.